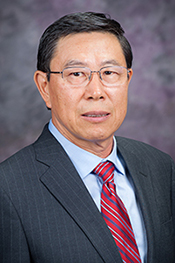 Research
Wang’s research has focused on bioconversion of renewable materials into biofuels and chemicals; biomaterials including protein adhesives, resins, and biodegradable composites, and near-infrared technology for analysis of physical and chemical properties of biomaterials.

Production of biofuels from renewable resources is his major research area. Wang and his students conducted fundamental and applied research to overcome some technical barriers for cost-effective production of biofuels from both starch based feedstocks such as corn, sorghum, and millets and cellulosic biomass such as grass, crop residues and woody biomass. Wang has collaborated with materials scientists to develop biodegradable protein-based adhesives and oil-based resins. The major focus on this area is to develop cost-effective technology to separate the proteins and carbohydrates from plant-based materials at high yield and high purity as well as low cost. He is co-director of the Bio Material and Technology Laboratory at K-State. He also conducts research on development of near-infrared spectroscopy models as rapid methods for analysis and characterization of physical and chemical properties of biomaterials. He has established research collaborations with engineers and scientists across the K-State campus and nationwide, and has been involved in several large nationwide research projects.

Academic Highlights
Wang has received as principal investigator or co-PI on numerous research projects. He has supervised 21 Ph.D. students, 11 M.S. students, 10 post-doctoral research associates, and numerous research assistant and visiting scholars. Wang has authored and co-authored more than 150 peer reviewed journal articles, 11 book chapters, more than 170 meeting papers and presentation, and three US patents. His research has been highly recognized nationally and internationally, and one of his research results has been used as new methods for industry. His research has been recognized by several awards including ASABE superior paper award (2011, 2013, 2015), ASABE Rain Bird Engineering Concept of the Year Award (2010, 2016), USDA Certificate of Appreciation Award (2008), Frankenhoff Outstanding Research Award (2009, 2015), and Applied Energy Journal Award for highly cited research and review paper (2016). Wang has served professional community as associate editor of the Transactions of the ASABE and Applied Engineering in Agriculture. He also served on several panels and technical committees.