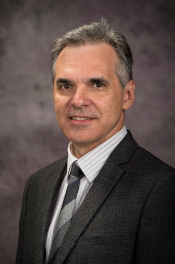 Professional Experience
Dr. Aleksey Sheshukov received a master’s degree with honors in applied mathematics and theoretical mechanics in 1991 and earned a doctorate in fluid mechanics in 1996 from Kazan State University in Russia. In the dissertation, he studied multiphase flow and solute transport in frozen porous media focusing on creating artificial frozen barriers for isolating hazardous materials in soils. After graduation, Sheshukov joined the Kazan State Power Engineering University as an Assistant Professor and Assistant Dean where he taught courses on thermodynamics, fluid mechanics and mass transport. During that time, he also worked as a senior scientist at Chebotarev Research Institute of Mathematics and Mechanics of Kazan State University. From 1999 to 2007, Sheshukov worked as a visiting assistant professor and later as a research associate at University of Minnesota on analytical and numerical modeling of gravity-driven unstable flows in unsaturated soils. In 2008, he joined the Kansas State University as a watershed modeling specialist and later Research Assistant Professor focusing on nonpoint source pollution sources in Kansas watersheds and developing watershed management plans. Sheshukov has been an Assistant Professor since 2012, where he leads the research and extension program on water quality.

Academic highlights
Sheshukov was a recipient of the Big XII Faculty Fellowship Award (2015), the Above and Beyond Award by the College of Engineering (2009), and ASABE Superior Paper Award (2012). He was a member on the K-State Watershed Restoration and Protection Strategy team that was nationally recognized in 2009 by the USDA-NIFA Partnership Award for Mission Integration and the EPA’s Best Watershed Plan in 2011). Sheshukov organized a regional workshop on Soil Erodibility and Jet Erosion Test in 2015, coordinated two international workshops on efforts to mitigate agricultural burning in Moscow, Russia in 2012 sponsored by USDA Foreign Agricultural Service, and organized USDA Scientific Exchange Program on Black Carbon. Sheshukov is a member of two ASABE technical committees and the American Society for Testing and Materials (ASTM) Standards Committee. Graduate students on Sheshukov’s research group were recognized by the awards at the Governor’s Conference on the Future of Water in Kansas in 2014, 2015 , and 2016 , Vietnam Educational Foundation scholarship, Air and Waste Management Association Scholarship, and various travel and education grants from Kansas State University. Sheshukov is a co-developer of the Weather Input for Nonpoint Data Simulation (WINDS) stochastic weather generator, the Watershed Assessment Tool for Environmental Risk (WATER), and state lead of the Daily Erosion Project.