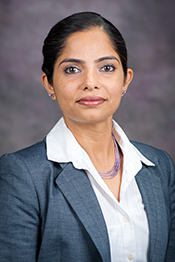 Hiring for Ph.D. assistantship in biological and agricultural engineering (pdf)

Vaishalai Sharda received her bachelor’s degree in agricultural engineering from Punjab Agricultural University, India in 2001. She went on to get her master’s of technology in the department of farm power and machinery in 2003 from the same university. In October 2003 Sharda joined the farm power and machinery department there as a research assistant and stayed until December 2006 before moving to the United States. In September 2007 she joined the biosystems engineering doctoral program at Auburn University. After completing her Ph.D. at Auburn, Sharda worked as a postdoctoral research associate at AgWeather Net at Washington State University and the Nebraska Water Center at the University of Nebraska, Lincoln. In 2018, she began teaching in the department of biological and agricultural engineering at K-State and became a tenure-track assistant professor in 2019.

Sharda’s research integrates agro-hydrologic models and climate data with farm management scenarios to explore complex dynamics of food-energy-water systems. Data analytics, feedback between irrigation decisions and water resources sustainability, along with design and evaluation of decision support systems for improving crop water productivity are of interest to her. Her research also focuses on coupling of anthropogenic and natural systems with applications in sustainable agriculture, water resources management and applied hydrology. Sharda’s field of study utilizes several surface water, groundwater and crop-growth computer models such as SWAT, MODFLOW and DSSAT, respectively, to study the impact of changing environment on the longevity and sustainability of limited natural resources such as water. She has also studied the impact of spatial soil variability on crop production systems in general and crop water productivity, specifically. The breadth of her research stretches from studying the impact of climate variability signals such as the El Niño southern oscillation (ENSO) on domestic water availability in drought conditions in the southeast United States to studying the impact of climate change on sustainability of the Ogallala Aquifer in the Great Plains.

Sharda is an active member of American Society of Agricultural and Biological Engineers (ASABE), American Geophysical Union and American Water Resources Association. She received ASABE’s Superior Paper award in 2017 and is a member of Alpha Epsilon (Honor Society of Agricultural, Food and Biological Engineering) and Gamma Sigma Delta (Honor Society of Agriculture). She has co-authored more than 16 peer-reviewed journal research articles and four popular articles. She is also a contributing author in two book chapters. Over the course of her career, Sharda has published five technical reports/bulletins and has presented her research at several international and national meetings and conferences. Her publications, as of August 2019, have resulted in 84 citations, and an h-index of 4 and i10-index of 3, according to Google Scholar. Sharda is also a member of NRES-21 and NRES-24, hydrology and irrigation subcommittees, respectively, of the ASABE.