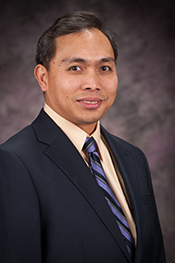 Jonathan Aguilar earned both his bachelor's and master's degrees in agricultural engineering, with focus on land and water resources from the University of the Philippines-Los Baños (UPLB). He gained his professional AE licensure in the Philippines after passing the board exam with national honors. He worked at UPLB as University Researcher II and handled several water resource related projects with UPLB Foundation Inc., Department of Agriculture and the UN Food and Agriculture Organization. He then came to K-State where he received his doctorate in in 2009. His dissertation focused on the changes of ecologically relevant flow parameters in Kansas’ streams. Aguilar then worked as a USDA ARS postdoc agricultural engineer in Sidney, MT from 2009 to 2011 and as postdoc Agricultural Scientist in Mandan, ND from 2011 to 2012. His research activities include remote sensing of crop residue and spatiotemporal analysis of crop diversity indices for the contiguous U.S. In December 2012, he became an extension water resource engineer with K-State Research and Extension based in the Southwest area office in Garden City, KS.

Aguilar began his career as an Agricultural Engineer with Special Recognition by the Philippine Board of Professional Agricultural Engineers for placing fifth in the national licensure examination. In 2008, he was sworn into the Alpha Epsilon Honor Society. He served as a mentor with the USDA-ARS American Indian Summer Internship Program in 2010. K-State awarded him in 2014 the Big 12 Fellowship Award. Together with other authors, Aguilar received the ASABE Blue Ribbon Award – Educational Aids Division in 2015. He has authored six high impact journal articles including one on crop biodiversity which was viewed more than 5000 times in a year and was featured in several mainstream media outlets and radio stations. He has delivered more than 50 presentations in a variety of settings from local up to international forums, at least seven of which were invited.