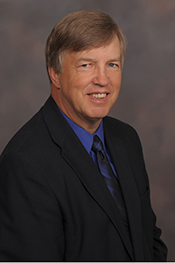 Professional Experience
Danny Rogers received a bachelor's degree in agricultural engineering from K-State in 1976, followed immediately by a master's degree in civil engineering in 1977. In that same year, he joined the faculty at the K-State Northwest Area Extension Office in Colby, Kansas, as an assistant professor and northwest area extension engineer, irrigation. He was promoted to associate professor in 1983. In 1986, he returned to school at Oklahoma State University on a USDA Fellowship where he received his doctorate in 1988. He returned to the department of agricultural engineering (now BAE) at K-State's Manhattan campus. He was promoted to professor in 1994 and in 2010 he assumed the additional duties of BAE State Extension Leader.